There are two types of public folders:

Default Public Folder: This folder can be accessed by users by using outlook application.

At the time of installation of Exchange Server 2010 in the Exchange 2003 environment, the public folder database is automatically created, and it will support legacy schedule, plus free and busy functionality for the client computer running Outlook 2003 and earlier, or Microsoft Entourage.

In order to replicate the Public Folder Database, follow these steps: 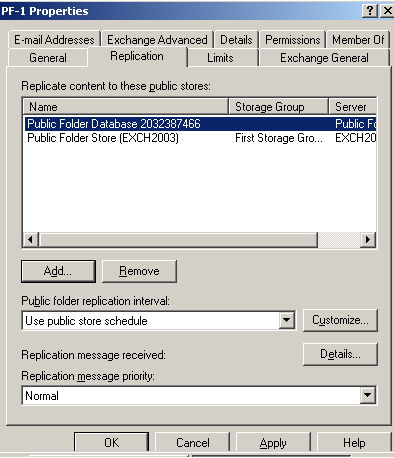 Once you replicate the public folders you can check the status by expanding the public folder store in exchange server 2003 -> replication status. If it is showing as In Sync that means the data is being replicated. 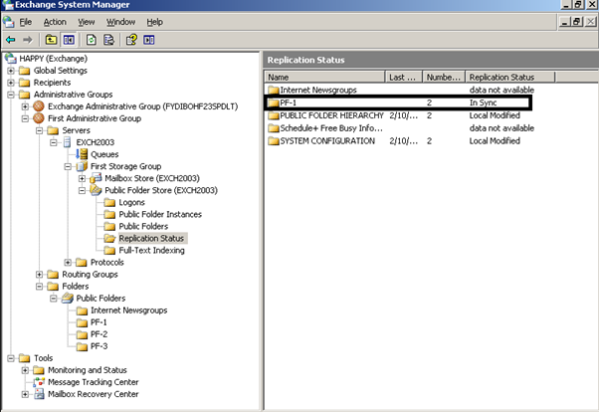 There are several ways to check the replication of the database:

This information will help compare content replicated between the source and destination servers. 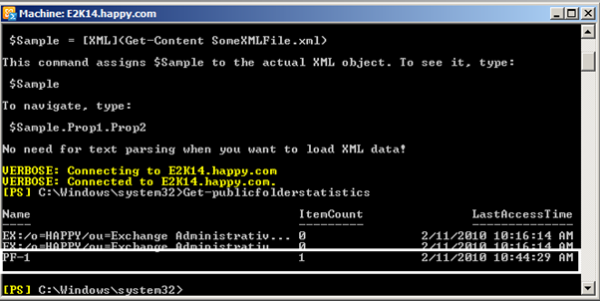 Then logon to Exchange 2003 box and check the item count.  Both of them should match with each other.  The other way to check is PFDavadmin content report functionality.

To check the replication details from powershell, run the following command:

Assuming that you are doing a migration, you want to move the public folder from source server to destination server without adding one by one.  So in order to do that:

Or else you run a script from the Exchange Server 2010 Moveallreplicas.ps1 –server -newserver

Now it is good to delete the PF store, so here right-click Public Folder store and click on delete.  It will give you a message:

It will ask you to select another PF store as a default one, assign role to system folder and OAB. When you click on OK it will display the PF server.  You need to select 2k10 server and then hit OK. 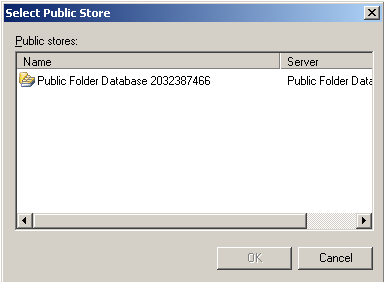 Then you will get a confirmation message for deleting, press Yes.

It will display the progress of the deletion of public store.

Then dismount and mount Exchange Server 2010 so that new changes should take effect. 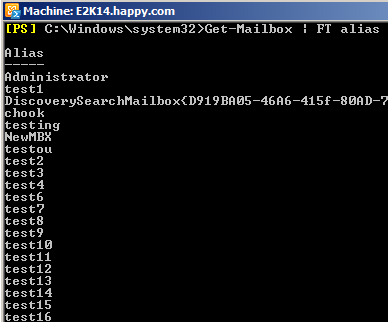 Is it possible for us to determine which mailbox is owned by which server?  I can follow two ways taking the output, either taking out recipient details or server name.

Based on that, you can remove the Exchange Server 2010 mailbox details.  Or else you can run get-mailbox | FT alias, recipientdetails | out-file c:\Alias.csv.
Now we have the alias details, and all we need to do is execute the script for bulk mailbox scripting.
Steps to execute the move mailbox command:
1) Copy alias.csv into the C:\ Drive
2) Open the script and set the target database name. In my case I am using the default one.
3) Dump this movemailbox.ps1 to C:\Program Files\Microsoft\Exchange Server\scripts
4) Open the powershell command and execute movemailbox.ps1

# 2. Set the database name in line $TargetDatabase = "Database Name" where you want to move the mailboxes

# 3. Put the list of all user's alias into c:\users.txt file

# 6. Once all mailboxes moves check the file c:\MoveLog.txt file for any error during movement

Certain Changes in Exchange 2010:
Ø There is no command called as Move-mailbox, if you try that one it will get failed.
Ø New command for move mailbox is New-MoveRequest
Ø In Exchange 2007 we need to ensure that user profile is closed while moving the mailbox, otherwise we will face issues while updating the new server details.  In Exchange Server 2010, we can move the user mailbox anytime, and the user won’t see any difference. That’s why if you see the above screen it is being queued and means it will run in the background.

Now let me show you the console status: 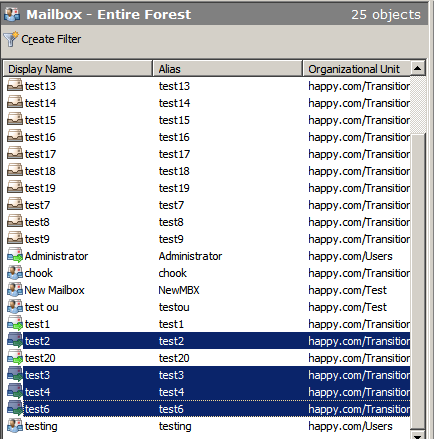 Another key point: whenever you execute the move mailbox from the powershell, it won’t show you the status immediately.  You need to check the event log for the exact status.
And in my script: it will create a movelog.txt which will again give you the status of the mailboxes.

You can see that it is taking one user per session.  Once it processes the first user then it will take the second user mailbox.
I am sure you will have Security Group and Distribution Group in the organization.  In order to make them aware in Exchange Server 2010 Server, we need to convert it to the Universal Group.
So for this you can select the desired group and then right click and then finally select convert to universal group: 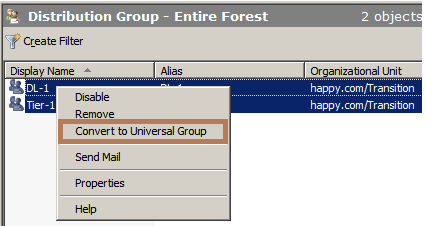 This is the one of core reason why we need to raise the domain functional level.

Rehome Offline Address Book:
If you check the OAB Generation Server Details, it will show you the Exchange Server 2003 by default. 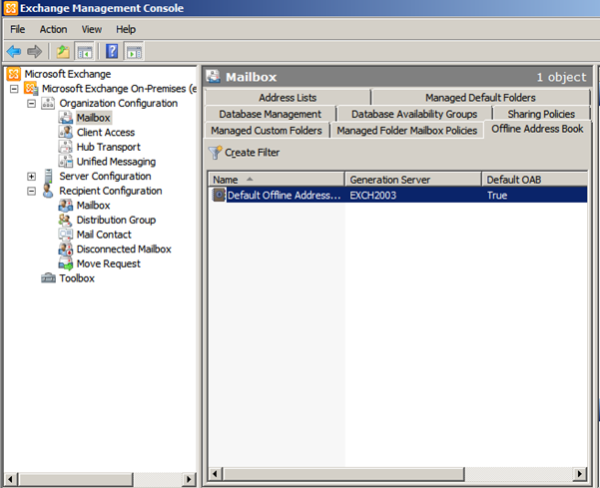 You can delete the Domain from ESM and enterprise RUS needs to be removed from ADSIEDIT.msc because enterprise can’t be deleted from ESM.  But in real time I noticed that some of them rehome the RUS in my condition, so I will follow the Microsoft recommendation. (Don’t forget to take a system state backup)
1) Deletion of Domain RUS
a. Log in to E2k3 server
b. Open ESM => Recipients => Recipient Update Service
c. Right click domain RUS and then delete it.

How to rehome RUS 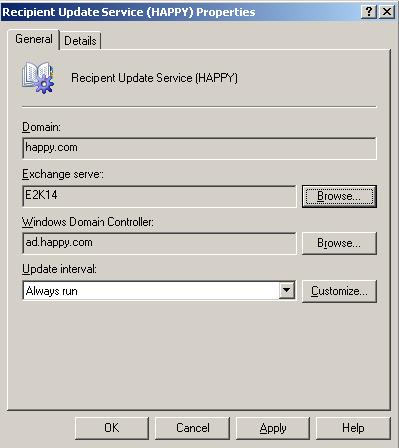 Follow the same steps for rehoming the Enterprise RUS.

Mailflow Settings:
You all know that Exchange Server 2010 relies on Active Directory Site Services.  It has only Send Connector and Receive Connector.  And, like Exchange Server 2003, it is not going to rely on Routing Group Connector any more.  So the very first thing we need to do is configure the existing an mx record to point it to new Exchange Server 2010. Create a connector in Exchange Server 2010 for sending the mail to smart host server or external DNS.
In my scenario, I have smile.com and happy.com - smile.com send email to happy.com keeping via Exchange 2003 and vice versa. So I need to change this setting and finally I need to delete the mailflow connector between my legacy exchange server.
First we will create a new connector:
Send Connector:
Ø Open Exchange Management Console
Ø Expand Organization Name
Ø Then click on Hub Transport and then click on Send Connector and select new send connector
Ø Select Internet as an option 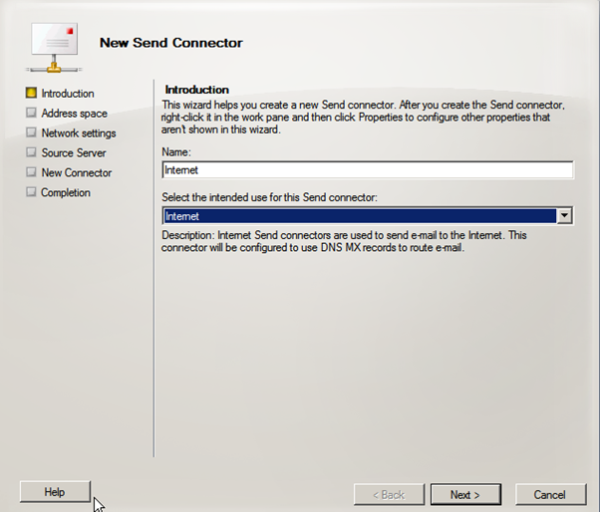 Then click on Next and then feed the appropriate details.

Receive Connector:
For the receive connector ensure that permission group set to Anonymous User as well otherwise you won’t receive many of the mails.

So in the real time, I believe you will have ISA Server or any smart host which will forward the email to Exchange Server 2003. Your ISA server will have a public IP address which will resolve the mx record of your domain.  So from the ISP Counter Part, i.e. your mx record won’t change anything.  In the ISA Server change the redirection of the incoming mail IP address to Hub Transport or Edge Transport Servers. Then Remove the Routing Group Connector.

Then click on NEXT and Again Next and finally finish.
After that run Exbpa tool to ensure that we had completed the task as per the plan and standard transition process.

Please subscribe by email to the ENow Solutions Engine blog to receive all of our articles as soon as they are published.  You can also follow us on Twitter @enowconsulting to receive the latest information relating to Exchange, SharePoint, Active Directory, and Lync.