It’s considered best practice to perform Jetstress before installing Exchange. Jetstress must be performed on every mailbox role server in an organization. After sizing the mailbox server with the help of Microsoft storage calculator, you decide the required storage size and storage type. Once you decide on the size and kind of storage, it’s time to validate your disk subsystem with Jetstress to make sure that you get sufficient disk Input/output (IOPs) to take up the load. Jetstress's result will help you evaluate your design, and if necessary, you may need to tweak the design.

If your organization has hundreds of mailbox servers to bring into production you will need an automated process. Here is an automated script to Jetstress your disk’s subsystem in a large scale. This script is also for those of you who want to start the script and forget it. It will verify the supporting files, disk subsystem, install and initializes Jetstress, finally stresses the disk and analyzes the result for you. Basically, it makes the Exchange administrator’s life easy. This script is inspired by Neil Johnson’s - Automating Jetstress.

In this article, we will talk about automating Jetstress completely with Jetstress 2013 for Exchange 2013 on Windows Server 2012.

What you will need before you start Jetstress automated script?

1. Configure Disk Subsystem and mount point as per the design. Make sure to follow all the best practices while configuring mount points.

2. Download the latest version of Exchange 2013 Jetstress(Jetstress.msi) from Microsoft - and copy to the folder c:\temp\Jetstress on the server.

3. Get the latest version of the ESE.dll and other below supporting files from Exchange 2013 binaries and copy it to the folder C:\temp\Jetstress on the server.

Note: Its recommend to get the Dll’s from the latest exchange 2013 version available.

a) Install Exchange Jetstress 2013 on the server.

b) Copy the dll’s defined above to “C:\program files\Exchange Jetstress” folder.

c) Start the Exchange Jetstress 2013 once to initialize the dll’s. Close and reopen the Jetstress application once.

Note: It’s recommended to “Run as administrator”, to initialize the dll’s and supporting files. 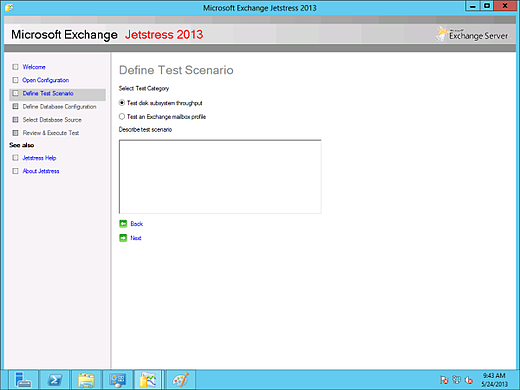 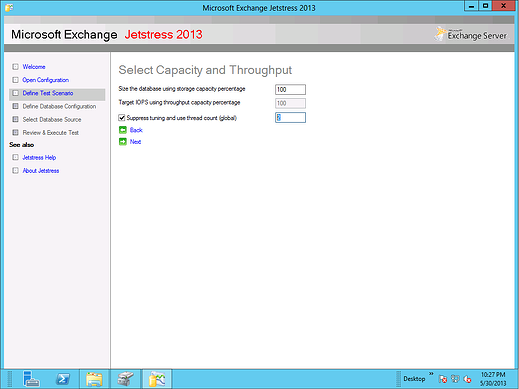 h) Select Test type as “Performance” stress test and also make sure that “Run background database maintenance” is selected and click “Next”. 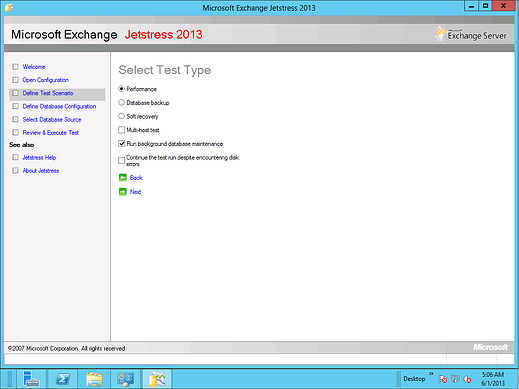 i) Specify the path for the test results as temp path “c:\temp\Jetstress\jetstressresults” and also specify the test duration as 2 hrs.

Performance test is performed if test duration is <=(less than or equal to) 6 hours.

Stress test is performed if the test duration is > (greater then) 6 hours. Performance test is the most recommended to get more accurate results.

j) Define number of Database, database copies and the disk subsystem configuration as per the design and mount points configured. 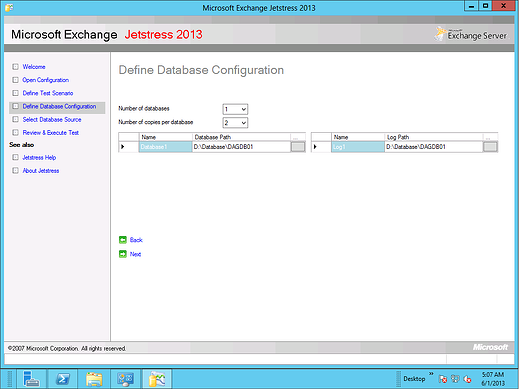 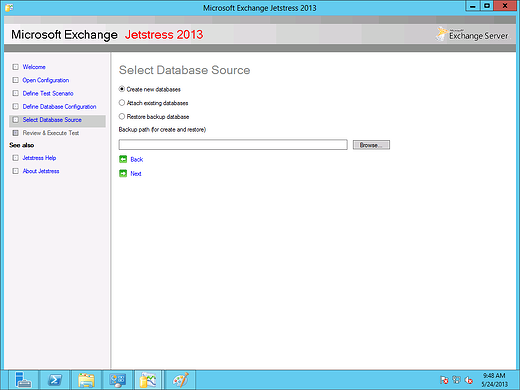 n) If your IOPS is not matching your requirement, then you may need to tweak the design and reduce the number of users on each DB.

o) Save the final configuration to c:\temp\jetress\jetstressconfig.xml and uninstall the Jetstress application.

Now, we are ready with the Jetstress.msi, supporting files and master configuration jetstressconfig.xml file. Let’s automate this using PowerShell.

Validates Jetstress.msi and other supporting files

Below is a function to check and verify all necessary Jetstress.msi and other supporting files exists in the directory c:\Temp\Jetstress. It is important to have all necessary files for the successful execution of Jetstress.

#function to verify Jetstress.msi and other supporting files.

Verification of the disk configuration.

To perform Jetstress, you need to have the disk configured as per the design. If you decide to have 20 databases in each mailbox server, then you have to configure the disk with 20 mount points. Microsoft recommends, keeping both Database and log files on the same mount point.

Use msiexec tool to install Jetstress.msi application in a silent mode. Once Jetstress is installed, it will copy all supporting files to “Exchange Jetstress” directory under “C:\program files”.

This is still not over however. Part 2 of the article will perform Jetstress and analyze the Jetstress result. We will also discuss how to consolidate all the functions defined in the article into one script and execute it from a single server to hundreds of servers!