In part 2 we initiate the Jetstress, stress the disk subsystem for a period of 2 hours, and analyze the result. We then will display the result for the users. Once the Jetstress is completed, the script also uninstalls the application for you.

Finally we consolidate all these functions defined in the article into a single script and call the functions to perform appropriate action. We also talk about the simple execution process and analyzing the result files.

For the first time, Jetstress needs to be initialized. It will register all dll’s and supporting files, was copied on to the Exchange Jetstress directory.

Once Jetstress is completed, the script will automatically verify the Jetstress file - performance*.html from the directory c:\temp\jetstress\jetstressresults and displays the result status on the PowerShell window.

Uninstall Jetstress, if Jetstress is successful

To have a complete PowerShell script, copy each of the above functions in the same order to a temp file and finally copy the below code at the end of functions and save the file as “Jestress.ps1” at the folder path “C:\Temp\Jetstress\”

Note: Make sure that you execute the Windows PowerShell in “Run as administrator” mode, so that, you have all necessary permissions to install and perform Jetstress on the local server.

Start the powershell application by “Run as Administrator”; change the directory path to C:\Temp\Jetstress and execute the file Jetstress.ps1. Below figure 8 has details of the same.  Script will validate the Jetstress.msi and supporting files, DB path, and installs jetstress. 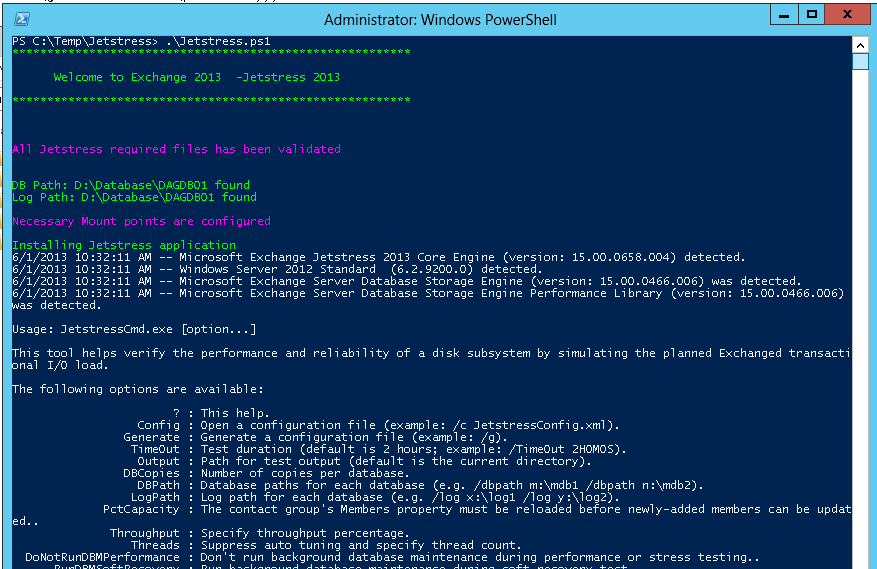 Finally, once Jetstress is installed and verified, it performs the stress test on disk subsystem. It validates the Jetstress result once stress test is completed and displays the result on the screen. You can find all the result files under c:\temp\jetstress\jetstressresults for manual analysis purpose.

Automating Jetstress is necessary for large scale deployment. Sometimes, you really cannot do a perfect job when you deploy in large scale and it’s the time where automation comes into picture.  Automation of Jetstress helps you to stress all mailbox servers with ease. It is important to perform Jetstress on all mailbox servers before moving to production and it would be a serious risk, if the server is moved to production without Jetstress.

I am sure this script will come in handy in your deployment and in production. Happy Jetstress 2013!