Yesterday, Microsoft announced the General Availability (GA) of Azure AD Connect. Azure AD Connect is considered to be the successor to DirSync/AADSync. However, it is much more than just a synchronization engine. The tool allows customers to use a single wizard to configure various aspects of identity synchronization and authentication with Microsoft's Online Services.

The wizard - which shows similarities to the one used in AADSync - allows you to install and configure various Directory Synchronization options and now also includes the ability to automatically setup and configure Active Directory Federation Services. Before, you still had to manually enable a domain for federation after having installed and configured AD FS yourself. Now, the wizard allows you to "pick and choose" which servers you are designating for AD FS and it will go out and perform the installation and configuration in Office 365 for the selected domains for you.

The biggest benefit of the tool is that it greatly simplifies the process so that administrators don't have to unnecessarily struggle with the entire process. After all, even though the sync and authentication process in itself are pretty straightforward, setup and configuration have proven to sometimes be quite challenging.

Next to these GA features, Azure AD Connect also includes the ability to preview features such as User- and Group Writeback; which Microsoft said to be releasing later. 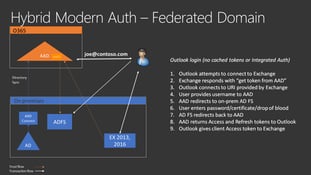 Hybrid Modern Authentication: Should I Care or Not?

In this blog post, Microsoft recently announced support for Hybrid Modern Authentication for...

As mentioned in my 2015 New Year in Review "Here We Are" blog article, the purpose of this article...