Most organizations are spread across multiple locations in today’s business world. Exchange being such a critical application, it’s essential to make sure that it is up and running around the clock without any downtime. Regarding High Availability and Disaster Recovery, Exchange 2013 has many features due to new improvements and some changes with DAGs as compared to Exchange 2010.

How would you provide a redundant path to send and receive emails from the Internet if an entire primary site goes down and exchange is running from the DR site?  Of course we can add additional servers in the DMZ to take up the load if one or more server goes down. What though could you do if the complete Datacenter goes down?

Let’s consider an example where we have two datacenters where Exchange servers are hosted.  The primary datacenter is in New York and has internet access to send and receive external emails through the internet and the other datacenter in Dallas. Both are interconnected by a high speed WAN network.

Figure 1 (seen below) is a visual representation of the above scenario: 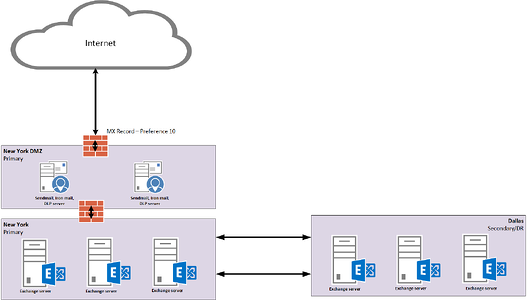 In our design example Exchange is configured in both AD sites. The primary site in New York hosts the Active copies while the secondary site in Dallas hosts the passive copies.  New York is the only AD site which is connected to internet.  To provide alternative internet mail flow we need to connect the Dallas AD site to the internet through the Dallas DMZ.  Figure 2, shows these details.  Just a connection to the internet at Dallas will not serve the purpose though. 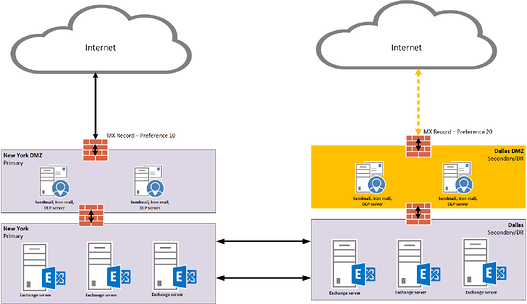 Let’s list down the simple steps to configure Dallas to send and receive mail over internet.

Configuring Dallas Site to Send Messages to Internet. (some steps already defined above)

It’s important to configure SPF and Sender ID correctly. Any misconfigurations can lead to non-delivery of messages to the target recipient. Most organizations accept email from the internet only if the message is from a trusted source.

Configuring alternative paths to send and receive internet messages are expensive. You would need similar number of servers, overall network infrastructure (DMZ and Exchange 2013 servers), configuration, and even the network bandwidth at Secondary site. This would be in case it must take up the complete internet email load in the event of primary datacenter failure.

Over the past two weeks, Microsoft has made a range of announcements around updates and new... 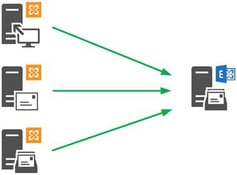