There are a few words Microsoft likes to use in several different situations. “Federated” is a great example of this. Federated can mean several different things in the Microsoft world, and it can sometimes be hard to tell what sort of “federation” you’re talking about.

“Supported” is another word Microsoft uses to mean different things in different situations, and what I’d like to talk about in this blog post.

The support cycle for Microsoft products has long been a point of contention for enterprise customers. Too long, too short, too many updates, not enough updates — I've heard every sort of complaint you can imagine, and I might even agree with many of them. Can you call Microsoft to get help with an “unsupported” configuration? Will you get patches for software that is no longer supported? Is Microsoft still developing new features for your software? Is it safe to run software after it is out of support?

In this blog post, I’m going to focus on the differences between Microsoft’s “old” software support model and the “new” model that comes with the cloud. It’s important to understand what you’re getting into with your move to the cloud, and how software support is changing for businesses.

Microsoft’s old business model was selling software. Under that business model, the software Microsoft sold only had value if the organizations that purchased it could deploy and support that software for a period after it's purchase. Because this software is always rather complex, organizations needed Microsoft to assure them someone would be available to assist them deploying and maintaining this software some time. For most Microsoft software, this support period is 10 years after that software is generally available.

When a new version of Exchange comes out, that software is “supported” by Microsoft for 10 years. We just need to understand what “supported” means in this case.

You can read all about the Microsoft Lifecycle Policy at the linked website in Microsoft’s own words. There is a lot going on there. The important thing to notice is there are three main sections: Fixed Lifecycle, Modern Lifecycle, and Security Updates.

During that whole 10-year support cycle, you can call Microsoft and open a support case. You’ll get a Microsoft employee who can help you resolve your problem or who can get in touch with the people who designed the software to find a fix for your problem. There may be caveats to that, though. You may be required to configure your software in a “support” manner before Microsoft will resolve your issue. That might mean specific virtualization configurations or certain patch levels. Microsoft will always tell you what configurations you need to make to get your software into a supported state, and they will even help you get it there. But if you are unwilling or unable to put your software into that supported state, they may close the ticket without resolving your issue.

Microsoft’s new business model is selling cloud licenses, and this model brings the Modern Lifecycle Policy. Essentially, this support policy is: “Your subscription includes the current version of the software. Please stay current with service and system requirements for the product or service.”

If we take the example of Exchange Online, you must have an Office 365 license for ExO and your client software must meet the current supported version. This policy is a lot easier for Microsoft to support, and this is one of the reasons why Microsoft loves the cloud.

Comparing Exchange and Exchange Online for these two support models, Microsoft currently supports 5 very different versions of Exchange; 2003 (for a very limited set of customers paying a lot of money for this support), 2007, 2010, 2013, and 2016. That is a lot of different software that someone must know about. For Exchange Online, Microsoft only has one version. This model is much easier to maintain and less expensive for them.

Let’s look at an example of a modern lifecycle product at the end of its supported lifetime.

As of February 28, 2017, the 2013 version of Office 365 ProPlus is no longer supported. This is our example of a Modern Lifecycle piece of software.

This is the version of Office you would have installed on your PC if you have an Office 365 license: Word Excel, PowerPoint, etc. For the entire lifecycle of this product, Microsoft was always making updates and improving features, and that is awesome.

Microsoft supported Office 2013 for about a year after Office 2016 was available in Office 365’s ProPlus package. Microsoft is not going to keep old versions of software available in cloud products.

Understanding manufacturer support options is crucial to almost any purchase. That might well be truer for purchases upon which your business relies.

For Microsoft software, the move to the cloud might confuse this issue for your organization. There are certainly benefits of moving to the cloud, but there are also downsides. I am always telling customers that the cloud moves forward, ready or not. If your organization is not ready to work at the speed of the cloud, then maybe hold off on that move to Office 365 while you rethink your IT department. Microsoft's Fixed Lifecycle support model has its own end of life coming, so it won't be an option forever.

Improve Your Exchange Deployment by Learning from a Massive Scale 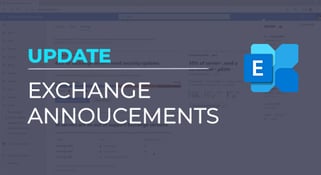 Yesterday, the Exchange Product made several announcements related to Exchange Server. The overall...