Azure AD Connect is one of Microsoft’s products for syncing your Active Directory users, groups, and devices to Azure AD. Of these products, it is the most used one and although it has some customization it also is very automated and easy to use in its set up and operations.

Time has caught up with Microsoft as a few of the required components of Azure AD Connect 1.x will go out of support next year and so Microsoft will retire all 1.x versions on 31st August, 2022. As you can see this is considerably before the more generous retirement dates that had previously been posted.

Therefore, although versions 1.x may continue to sync to Azure AD after the end of August 2022 they will not get security updates, may unexpectedly stop working and will not get product improvement and service enhancements – that is, there will be no more 1.x versions to upgrade to. So, it is time to move to the newly released 2.x version. Upgrading the version is the responsibility of the Global Administrator and the server administrator on which the application is installed.

Version 2.0.3.0, the first 2.x version, was released in July 2021 and there have been three updates to this since then. At the time of writing this blog article (September 2021), the latest version of Azure AD Connect is 2.0.10.0, but we will refer to this version as 2.x in this article, because when you do your own upgrade, you would be upgrading to the latest available at that time and not the version that was released when I happened to write this article!

Version 2.x updates all the components that are going out of support at the end of August 2022 and the single installer for version 2.x updates all this software for you or if you are running the installation on a new server, then it will install the correct components for you. It is not going to work if you install just the components that are being retired, as version 1.x will still use the out-of-date versions already installed. For example, Azure AD Connect version 1.x uses Microsoft SQL Server2012 Express LocalDB, the ADAL authentication library and Visual C++ Runtime version 12. Azure AD Connect version 2.x will use SQL 2019 LocalDB, the MSAL authentication library and Visual C++ Runtime version 14 (as this is required by SQL 2019). Version 2.x will also require the underlying operating system to use TLS 1.2 and it will not install if TLS 1.2 has been disabled.

If you have installed version 1.x on Windows Server 2016 or later then you can upgrade 1.x to 2.x just by running the installer (and a few other things) unless you have a requirement or desire to do a swing migration. For example, if you have custom sync rules in place then you might already be in the habit of doing a swing migration and so you should keep to this practice here.

This was the process I ran one of my client's deployments recently and which I am going to outline below. If you don’t have a staging server or your current deployment is on Windows Server 2012 R2 and earlier then you will need to do a swing migration, but you will migrate to the newly installed server having changed your current active syncing server to staging mode first.

Finally in preparation for a migration from 1.x to 2.x, the later versions of 1.x support a configuration export which can be used when installing 2.x. So, if your current 1.x deployment is not up to date I would suggest starting there – upgrade to the latest 1.x version, export the configuration, and then use that export to build the new 2.x server deployment where you don’t have an existing staging server on Windows Server 2016 or later that you can upgrade directly. 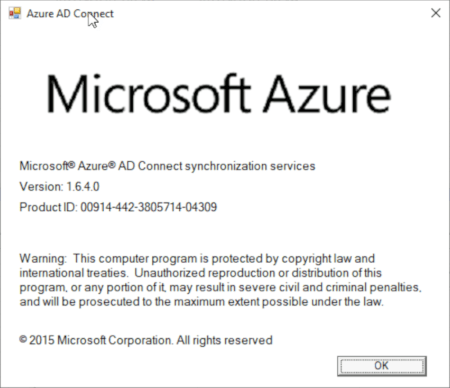 As I mentioned above, I recently took a two server Azure AD Connect deployment from version 1.x to 2.x and it was mostly seamless. Here is what I found.

The deployment was already on Windows Server 2019 and there were two servers in two different locations, one being the active syncing server and the other the staging server. We started with the staging server and just downloaded and ran the latest 2.x installer. And this is where I hit my first issue, and this issue is now mentioned on the download page as well. The Windows Server 2019 deployment supported TLS 1.2, but was not detected as being the primary version of TLS in use, so the Azure AD Connect installer errored, pointed me to a Microsoft Docs article on what to run (a short PowerShell script) but after doing this and rebooting the server the Azure AD Connect 2.x installer claimed the previous installation had failed and gave me an option of uninstall or repair. I choose repair and we were fine from that point onward. The installation continued, the dependencies were upgraded, and the sync configuration migrated to the newer settings. 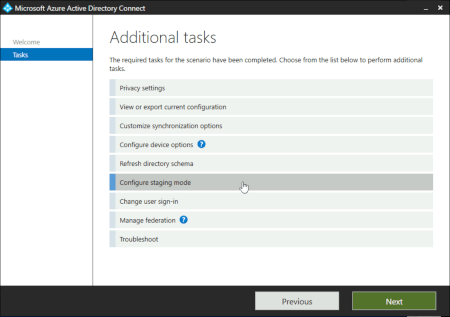 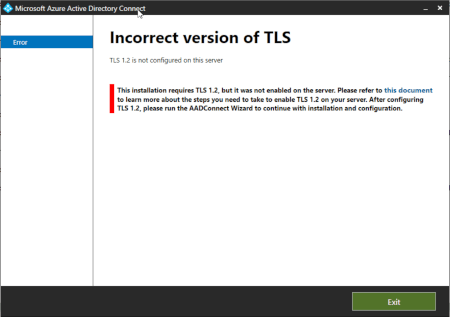 Because the installer is just looking for the existence of registry keys to see if TLS 1.2 is enabled, you just run the PowerShell Microsoft provide and there is in this case no need to reboot the server because TLS 1.2 was enabled, and it was just an issue detecting this. Restart the Azure AD Connect wizard to complete the upgrade. If you run the installer software again you will get a prompt about repair or remove the software as mentioned above – choose Repair here if you rerun the installer application. 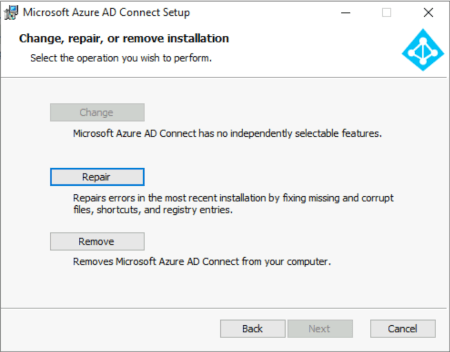 Once your upgrade is completed ensure sync is working from the Azure AD Synchronization Service application and then you can optionally move staging server role back to the original server before you started this whole process. At the end of the upgrade a Full Import from Azure AD and then a Full Synchronization step happens for each connector, so you need to wait for this to complete before you can enable staging mode on your standby server and then turn off staging mode on your original primary server. 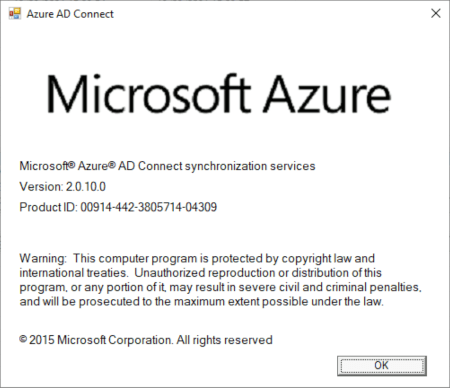 Active Directory is the foundation of your network, and the structure that controls access to the most critical resources in your organization. The ENow Azure AD Connect Monitoring and Reporting tool uncovers cracks in your Active Directory that can cause a security breach or poor end-user experience and enables you to quickly identify and remove users that have inappropriate access to privileged groups (Schema Admins, Domain Administrators). While ENow is not an auditing software, our reports reduce the amount of work required to cover HIPAA, SOX, and other compliance audits.