On February 3, 2022, at ~04:36 am UTC, Microsoft communicated via tweet (@MSFT365status) that they were investigating an issue in which users (in Europe) were unable to access the Microsoft 365 admin portal.

Approximately an hour later, Microsoft was confirming that a recent update on their end was causing the issue (although there was no deeper explanation as to what the "issue" was).  Microsoft was reverting the update in an effort to remediate.

At approximately 08:38 am, Microsoft then stated the update reversion was completed and restarts were done and that they would continue to monitor to ensure recovery.

As far as information from Microsoft via status.office.com, additional details from Microsoft confirmed that the impacted geo was not confined to Europe, but also included the Middle East and Africa, as well as an admission from Microsoft that the service incident at hand could potentially affect other geo regions as well.  Microsoft also gave signs that service health was improving at this time. 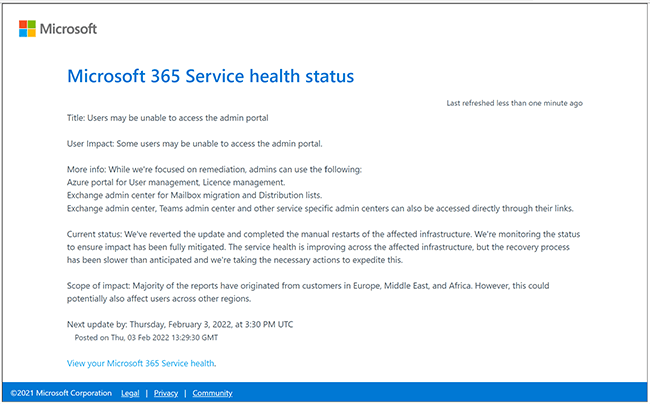 Some 7 hours after first disclosing the issue via @MSFT365status, Microsoft still had not confirmed the issue resolved, but they were taking significant steps in that direction.

At 12:01 pm, Microsoft was finally able to confirm that remediation actions were completed and the issue was now resolved. Microsoft at this time also provided an incident #, MO320759, for system admins with access to the admin portal.  When last checked, status.office.com also was showing no issues as to Microsoft 365 service health.