On February 21, 2022, at ~03:58 am UTC, Microsoft communicated via tweet (@MSFT365status) that they were investigating a service incident impacting Microsoft Planner, Tasks, and Teams.

There were very few responses from the "Twitterverse", which is usually an indication of a minor service incident.

Approximately 1 hour after first reporting, Microsoft communicated a second tweet, advising that it was a recent (MSFT) change which was causing an impact to a certain internal policy service. There were no details or elaborations by Microsoft as to what the change was, when the change was made, and what the impact to the internal policy service was. At this time, Microsoft also confirmed that they were routing connections to remediate. 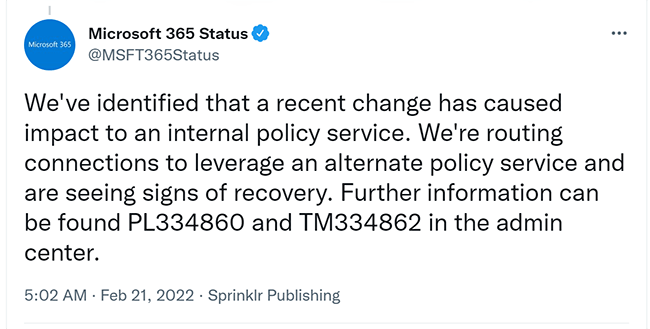 At approximately 05:53 UTC, Microsoft had declared the matter fully resolved.