In my previous article in this series, we discussed Exchange “Alternative Architecture” options for medium-to-large businesses. We specifically covered common storage design options and which were ideal to design the best solution for a customer that has decided to remain on-premises and chosen to not follow the Preferred Architecture. To reiterate, I’m a big fan of Office 365 and the Preferred Architecture but I understand many customers will not follow either of these two routes. Therefore, if they deviate from either of these options they should at least follow the recommended guidance that can increase the uptime and better the performance of their solution.

With that said, we’ll now cover a commonly encountered technology in Exchange deployments; virtualization. Many Exchange support escalations I’ve worked have centered around architectural mistakes which could’ve been avoided by adherence to supportability guidelines and best practices. With that in mind, let’s discuss a core principle around Exchange virtual architecture.

This Exchange 2013 Virtualization Best Practices guide from Microsoft is still accurate for Exchange 2016 and should be closely followed. Yet if I were to pick a singular deviation from best practice which harms Exchange deployments most often, it would be CPU sizing. I previously covered this topic in my “CPU Contention and Exchange Virtual Machines” ENow post but I’d like to expand upon what CPU over commitment really means and how it can affect design decisions.

Let’s attempt to define some virtualization terminology in a simplistic manner using a specific Intel processor as an example:

CPU Socket = Physical connector on a motherboard where a physical CPU chip is connected. To be precise, it is the mechanical component that allows the electrical connections between a microprocessor and a printed circuit board. However, you’ll commonly see the term CPU Socket used colloquially to refer to the physical chip itself. For instance, if a server has two Intel i7-7920HQ processors, it may be referred to as a “two socket system.”

CPU Core = Individual processing unit. Most modern CPU chips have multiple cores, or “Physical CPU Cores.” Using the same Intel i7-7920HQ as an example, each Intel CPU chip has 4 physical CPU cores. So in this two socket system, there would be 8 physical CPU cores.

Note: Socket, Core, Logical Processor, and vCPU terminology may change between hypervisor vendors, but for the purposes of this blog post, a single vCPU is synonymous with a single virtual core.

Let’s get a visual representation of this. In the below image, you have our 2 socket Hyper-V host with 8 physical CPU cores. 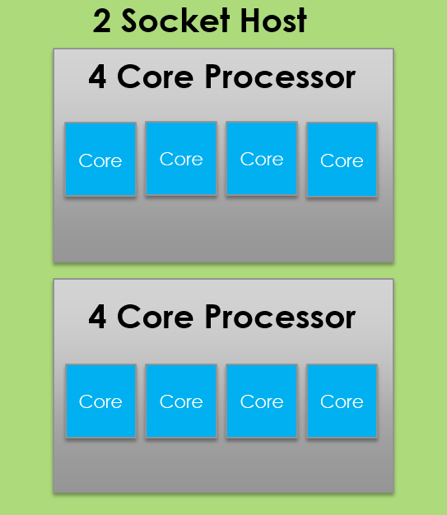 Now let’s say we enable Hyper-Threading in the BIOS, causing the Windows Operating system to detect 16 logical processors. To a Windows Hyper-V host, the maximum number of assignable vCPUs to a virtual machine is equal to the Logical Processors detected. For instance, in the below image we have 16 virtual machines on this host, each with 16 vCPUs assigned.

Microsoft states that for virtualized Exchange servers, the assigned vCPU to Physical CPU core ratio on a hypervisor host system can be no greater than 2:1 (Reference). While hypervisors are designed to efficiently share physical CPU resources across all assigned vCPUs, this still comes at a cost; time and latency. CPU overcommitment is acceptable and often expected in virtual environments, but it largely depends on the workload and what the vendor chooses to support. For instance, Desktop Virtualization (VDI) solutions can often function perfectly fine with a ratio as high as 24:1. After all, a Windows 10 client machine has very different latency requirements than an Exchange database. Therefore, the Exchange Product Team chooses not to support virtualized Exchange when the vCPU-to-Physical CPU Core ratio exceeds 2:1. They actually recommend 1:1 for best performance, but 2:1 is supported.

Note: It’s important to remember that I’m saying vCPU-to-Physical CPU Core ratios. This means logical processors do not matter, only physical CPU Cores. Therefore, even if you have Hyper-Threading enabled, you should size as though it is not.

Now how does this translate to Exchange architecture design decisions? Well you should obviously ensue you do not exceed the 2:1 ratio if you want Microsoft to support the solution. However, what things can you do to ensure your design doesn’t change? How might a supported solution become an unsupported one?

In the below scenario, Host-A is in a supported state (as far as Exchange is concerned). But what happens when a hapless Jr virtualization admin live migrates the Exchange VM to Host-B?

Simply by moving a virtual machine from one host to another, a supported solution becomes an unsupported one. For examples of how this can actually impact the performance of Exchange servers, I discuss this in my previous ENow post titled CPU Contention and Exchange Virtual Machines. So architecturally speaking, this means ensuring your virtual environment makes good use of affinity, resource scheduling, and monitoring features to help ensure that no production Exchange virtual machine can be moved in such a way that places it into an unsupported state. Similarly, ensuring the movement of other virtual workloads do not affect the supportability and performance of Exchange.

For additional information regarding Exchange virtualization, NUMA node boundaries, and other Exchange sizing guidance, see this blog series from a VMware design and performance expert.