On April 1, 2021 at ~10:43 pm UTC, Microsoft reported an issue that was preventing users from accessing the Microsoft's Azure cloud services and Microsoft 365 services. And no, unfortunately this is not an April Fools joke.

Shortly after Microsoft's initial report, Microsoft tweeted that they were investigating a potential DNS issue and were evaluating mitigation options. They soon after reported that they had rerouted traffic to their resilient DNS capabilities and were seeing improvement in service availability.

Many users on Twitter voiced their frustration with the recent stream of outages, including the major Microsoft outage on March 15th. 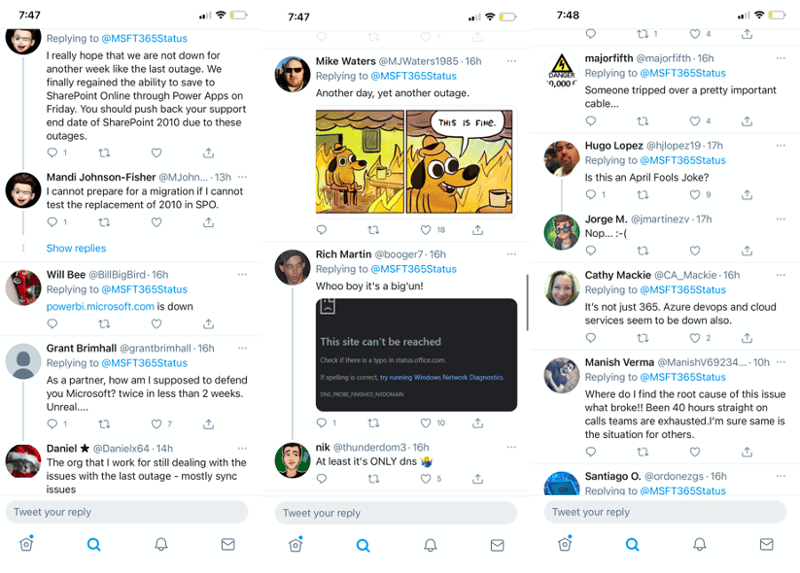 Microsoft reported that as services continued to recover, information would be available in the admin center. They also reported that they were managing multiple workstreams to validate to validate recovery and apply necessary mitigation steps to ensure full network recovery.

Finally at ~3:30 am UTC, they confirmed that they had resolved the issue fully and confirmed that all Microsoft 365 services had returned to a healthy state.

It appears that the outage stemmed from a Domain Name System error due to "a recent change to an authentication system." Although Microsoft handled the outage rather quickly, users were not happy due to a similar outage just two weeks ago that left users in the dark and offline for hours. DNS has been the root cause of multiple Microsoft outages of late which means it may be time to make some big changes to how Microsoft manages their network.