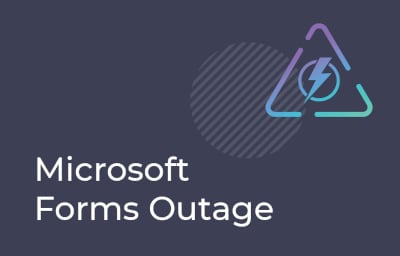 On November 17, 2021, at ~8:30 am UTC, Microsoft communicated via tweet (@MSFT365status) that they were investigating an issue in which users were unable to access Microsoft Forms.

For IT professionals and system admins with Microsoft admin center access, the issue # was FM298724.

The responses on Twitter from the public were very few.  This, normally, is indicative of a very minor service disruption issue and not a true and wide-reaching service outage.

Within an hour Microsoft followed up with a second, and final, message on Twitter as to the issue.  According to Microsoft, an unexpected increase in user requests resulted in the Microsoft Forms service impact.  Microsoft took remediation steps (scale-up activities performance), however they did not also state directly that the issue was now resolved.

Several checks of status.office.com during this time showed no information whatsoever as to any changes in the Microsoft 365 Service Health Status.

As of 2:00 pm UTC, there have been no additional updates from Microsoft @MSFT365status regarding FM298724.  At this time, given the assumed minor nature of the issue, the matter appears to be resolved.