On October 4, 2021, at ~7:28 pm UTC, Microsoft communicated via Tweet (@MSFT365status) that they were investigating an issue affecting user access for Outlook. 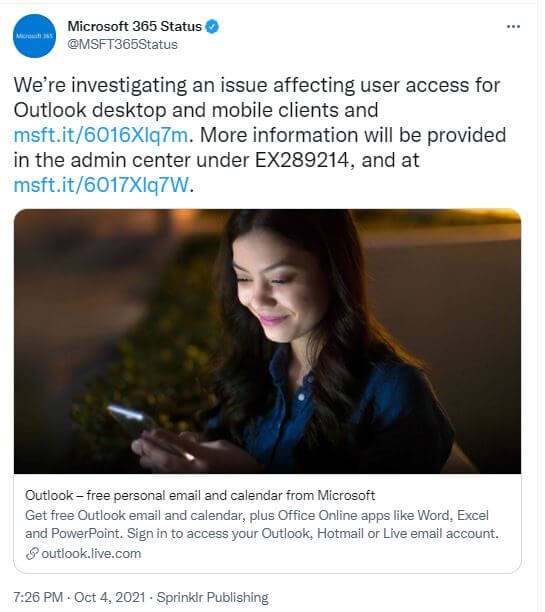 Within minutes of their first message, Microsoft sent out a "correction" tweet and provided the proper URL for the service status.  At this time, Microsoft still had not determined (or was willing to disclose) the cause of the problem impacting Outlook access.  System admins were directed to check with the Microsoft admin center, and status.office.com had slightly more detailed information.

By approximately 8:18 pm UTC, less than an hour after first announcing their investigation into the matter, Microsoft was able to confirm that a recent configuration updated was the root cause, which impacted several Outlook connection methods.  Microsoft at this time began reverting the change in order to rectify the issue. 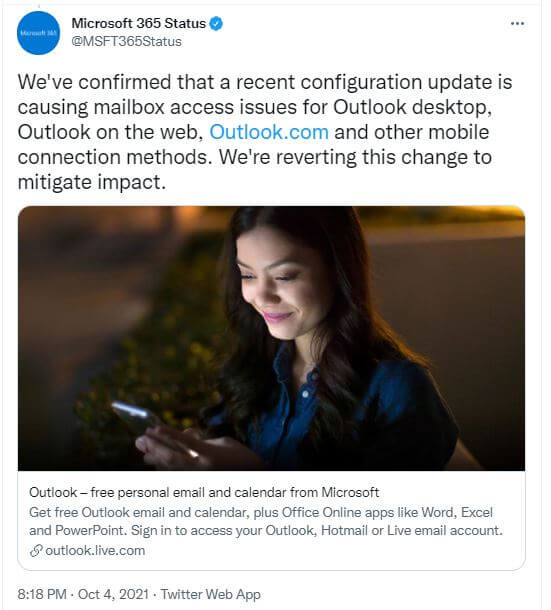 But all was not resolved.  Within the hour,  at approximately 08:58 pm UTC, Microsoft provided an additional incident number, MO289250.  Their initial investigation as to the Outlook issue revealed that other services, namely Teams and SharePoint Online could be experiencing issues as well.

Some 2 hours after their last message, Microsoft was brief in its response indicating no information as to root cause, and indicating only that their mitigation efforts were showing "positive improvement" on the impacted services.  Microsoft also indicated a third incident number, OL289238.

Just after midnight, Microsoft communicated another short message, devoid of details and particulars, stating only that significant improvements were still being seen.

And at approximately 1:38 am UTC, some 7 hours after first reporting as to the Outlook access issue, Microsoft provided its final communication as to all of the above service issues:  mitigation efforts were now completed and the issue was fully resolved.