On April 18th, 2022, at ~7:07 am UTC, Microsoft communicated via tweet (@MSFT365status) that they were investigating an issue in which users were unable to open files in SharePoint Online, OneDrive, and Teams.

Microsoft's next two communications confirmed that they were investigating the issue but had not identified a root cause.

At approximately 11:00am UTC, Microsoft announced that these service incidents appeared to impact only users in Greece.

Microsoft then announced that, through rerouting services to alternate infrastructure, there was at this time some resolution for some users.

Then at 1:59pm UTC, approximately 7 hours since first reporting, Microsoft was confirming that the matter was resolved.

However, at 06:09am UTC on April 19th, some 16 hours since their last message announcing the matter resolved, Microsoft reported that the service incident persisted.  Microsoft confirmed that they were "restarting" their investigation as to the issue.  Microsoft also provided four (4) new service incident #'s: SP361049, TM361099, OD361100, and OO360716. 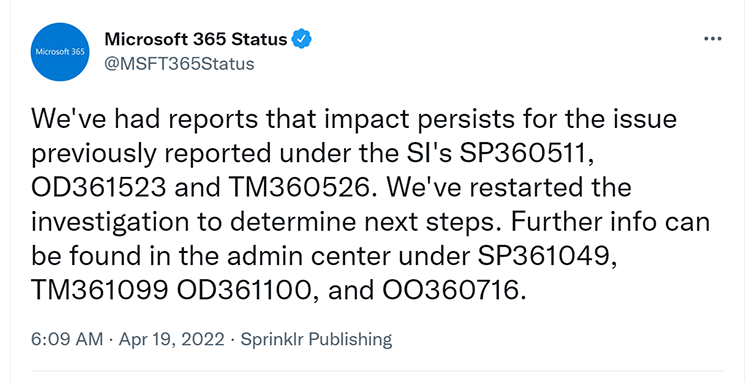 Finally, at 9:24am UTC on April 19th, Microsoft was confirming (again) that the issue was resolved.

There have been no further messages from @MSFT365status as to any of the service incidents #'s mentioned above.