Why haven’t you finished your Microsoft 365 migration yet?

Microsoft 365 is not new. It’s been around for well over a decade, both in its current form as well as in its previous/current incarnation as Office 365 and before that we knew it as BPOS / Microsoft Online Services.

More often than not, the migration to Microsoft 365 arises due to a compelling event such as end of life / support for an underlying platform – such as Exchange Server, the Windows Server version it’s installed on, going all the way down to the computer and storage system powering it. In some cases, the decision to migrate may be because the contract with a hosting provider is coming to an end.

In these scenarios, the organization must move platforms, and when they do so a TCO analysis is often conducted, and the decision is made to move to Microsoft 365. Budget is allocated to assist with the move, resources are lined up, plans are made, and away they go. The focus of this migration is predominantly on the workload that is most at risk, because risks must be averted, and if some benefit is gained along the way by deploying other M365 workloads then we can consider the project complete and our migration a success.

At best, the organization has most likely deployed only the core workloads which has largely been a like-for-like replacement; on-premises or hosted Exchange to Exchange Online, on-premises or hosted SharePoint to SharePoint Online, home drives to OneDrive. And because of this, little thought is given to adoption; at best it is an after-thought and limited to just some awareness communications and basic training.

The problem here is that it’s not like-for-like. Exchange Online comes with many features that its Server counterpart does not. A good example of this is Focused Inbox and predictive text. I hear so often from end-users that they don’t want Microsoft reading their emails and telling them what emails are important or what text to write next.

Other scenarios and reasons for migrating might be non-compelling events such as license agreement renewals, and unfortunately these get even less importance and attention. The reasoning is generally “well it’s there and we’re paying for it, so may as well use it”. With this kind of reasoning there is little chance of obtaining the proper funding to “use it” properly – because why spend more money if you don’t need to?

Why do more than what is necessary?

What happens in the above scenarios is that the focus is purely on doing what is necessary, or the bare minimum to get an outcome.

While a migration from home drives to OneDrive is a big improvement, a move from file shares to SharePoint libraries is a lot more challenging. Yes, it is possible to simply do a ‘lift and shift’ where drives and folders are put into corresponding sites and libraries, but all this does is bring the mess from the old world to the new. Even a lift and shift approach to file shares to SharePoint is a vast improvement due to basic features like versioning, sharing and search – but it misses a key opportunity to really improve how people work.

Organizations tend to become complacent after they’ve completed their primary migration objectives. The job is done, so why look at other apps like Forms, Planner, Sway, To Do, Lists, let alone advanced services like Power Automate, Power Apps or Power BI? These are often classified as too hard, too complex, offer too little benefit, or left for end-users to discover figure out for themselves.

Take a look at the files you work with on a daily basis. Sure, many of them probably need to stay in file format for various reasons. But you can’t tell me that your users don’t have a project task list or tables of information in spreadsheets, surveys and forms in documents, information in presentations and documents and so on. These can easily be replaced with Planner, To Do, Project, Forms, Sway, Lists, SharePoint pages with web parts, and many other uses of M365 features.

Moving to SharePoint beyond just file storage, if even considered, often slows down to a crawl. Almost every organization I’ve spoken to over the past 5 years that has been in M365 for a while still has file shares. And I don’t mean file servers because of applications or systems that are not M365-aware, I mean because they just never started, prioritized, or finished their file migration. Complacency has well and truly set in because the primary objective of the initial migration was achieved. There is no longer a compelling reason to keep moving forward. 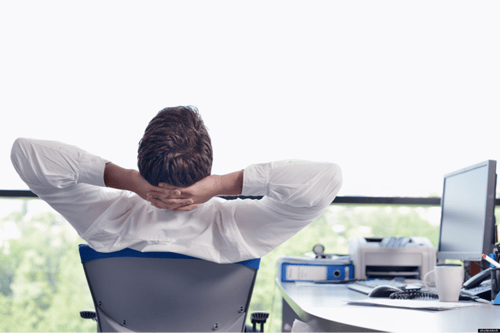 When does it end?

This is how organizations need to approach Microsoft 365 – make it part of their ongoing evolution. Simply migrating from one state to another is not enough. No business gets to a point and says, “we're done now, we’ve done all the business improvements we need – now we just stay the same for the foreseeable future”. That business would not last long in the current world.

Therefore, how an organization uses features within Microsoft 365 needs to keep changing.

Those small apps you didn’t care about during your migration like Forms, Planner, To Do, Power Automate? Start looking at them now. Start implementing them now. Build a community of practice, center of excellence, whatever you want to call it, but something to help the organization keep moving forward and getting more value out of its investment in Microsoft 365.

The other day an end-user from one of my clients asked if there was a way in Microsoft 365 that she could manage tasks and assign them to colleagues in a team. This pained me to hear, because the functionality has been available in Planner since before that organization migrated to Microsoft 365 – but end-users weren’t aware of its existence. However, this is just one small example of where an organization prioritized the migration and then didn’t think further about how to leverage the platform.

Look at your inbox – do you still receive email attachments from colleagues within your organization? If the answer is yes – then the “migration” isn’t complete yet.

And there’s the rub. This is 2021. In the past 18 months, our world was forced to undergo a gigantic digital transformation as a result of COVID. Those who experienced the most pain were those who hadn’t transformed enough, especially those who had not completed their migrations.

It was frustrating to still be talking about migrations at the start of 2020, but now, with 2021 almost over, why haven’t you finished your Microsoft 365 migration yet?