As we start of 2020, we thought it would a perfect time to look back at the ENow Solution Engine blog results for 2019.

It truly was a HUGE year for IT Pros due to the many improvements and new capabilities various Microsoft Teams (meaning groups of people, not just the Teams team 😜) brought us.

Last year we recapped the Top 7 Posts of the year, this year we had to raise it to 12 as there was just so much great content written by our talented MVP blogger team. Without further ado, lets jump in to the Top 12 Post of 2019! Please note these are in no particular order.

On February 12, 2019, Microsoft released its quarterly updates for Exchange server, and in this case Microsoft has released Exchange 2019 CU1, Exchange 2016 CU12, Exchange 2013 CU22 and Exchange 2010 SP3 Update Rollup 26. The updates are not fancy and not sexy this time, but they do bring a very important security fix.

Many organizations unfortunately found themselves in Island- Mode in 2019, which led to unhappy end users… This turns out to be a real problem as most companies just turn on Microsoft Teams without properly planning their journey from Skype for Business to Microsoft Teams. This results in unhappy users because of feature overlap and none interoperability between both communication tools. In this post Johan covers how to avoid Island mode.

3. The Microsoft Hybrid Agent Public Preview: What You Need to Know - Jeff Guillet

Microsoft introduced the new Hybrid Agent Public Preview in February of 2019. This represents a small, but important, step toward making it easier for on-prem organizations to implement a hybrid configuration with Exchange Online.

Work on the new hybrid agent was announced at Microsoft Ignite 2018 in Orlando, FL to great fanfare. In this article, Jeff will discuss what it all means and caveats for this implementation.

In this blog post, Nathan will go over how to install Exchange 2019 on Server Core, the reasons why you should be installing all your new Exchange servers on Server Core, and how using Server Core is going to make you a better administrator.

Recent reports have shown that Teams is gaining a lot of momentum within the enterprise. According to the survey from Spiceworks, about 21% of the respondents were using Microsoft Teams over 15% that were using Slack. Although the sample size (901 respondents) is too small to represent the entire market, it clearly shows an upward trend.Given its popularity, it’s not uncommon to see that Teams is also used within organizations that haven’t fully migrated to Office 365 (yet). However, the use of Teams in a hybrid deployment is bound to a couple of restrictions.

Microsoft did a great job and provided a lot of tools to secure your organization’s environment. Independently for which authentication solution you will decide, you have to protect your accounts for every sign-in method, no matter if it is native cloud-only authentication in Azure AD or on-premises authentication with AD FS. This blog will explain why passwords are weak and why you should use a password-less sign-in method to access your on-premises and cloud applications.

7. What you need to know about the Microsoft Hybrid Agent GA - Michel de Rooij

Earlier in the year, Jeff covered the Hybrid Agent Public Preview. In this post, Michel cover the will discuss the major changes in the agent since the initial Preview release. The purpose of the Hybrid Agent, also branded as the “Exchange Modern Hybrid Topology”, is to simplify the process of setting up and deploying Microsoft Exchange Hybrid for Exchange 2010 and later deployments, where full “classic” Exchange Hybrid is not an option.

Exchange server 2007 was the first version that was a 64 bit version of Exchange server, and was therefore capable of using much more resources than for example Exchange 2003.

As you can see, there are several dependencies. How do you know which route your Outlook client is using?

In their blog article, "Improving Security - Together," the Exchange product group announced that the insecure Basic Authentication authentication method switches off on October 13, 2020, not just for Exchange Web Services (EWS), but also for Exchange ActiveSync (EAS), POP, IMAP, and Remote PowerShell.

There are several ways outlined by Microsoft that can be found here. This blogpost goes over migrating from an integrated Exchange server infrastructure to Exchange Online with a hybrid deployment. I will not cover third-party migrations, as this is not relevant for the topics mentioned in this post.

12. 6 reasons why Scheduled Maintenance is the Hottest Party at Microsoft Ignite - Nicole Silva

Scheduled Maintenance, ENow’s annual party, has gained quite the following over the years. This year, the ESE readers were clearly eager to hear a couple spoilers before 2019’s party at Ignite. It’s safe to say this year did not disappoint, due to awesome WOW factors like fire acrobats (we didn’t even know that was a real thing), cigar rolling, bourbon tasting, and of course all the awesome community engagement. Special thanks to our lovely sponsors Microsoft Exchange & Outlook, and Veeam.


Well that’s it for this year, excited to see what 2020 will bring us! Join the conversation on Twitter (@ENowConsulting) and let us know your favorite post!

ENow editorial team’s main goal is to product high quality content that is of value to the the IT Pro community. If you have any suggestions please contact our marketing lead, Nicole Silva at Nicole.Silva@ENowSoftware.com

Monitor Your Hybrid - Office 365 Environment with ENow
ENow’s solution is like your own personal outage detector that pertains solely to your environment. ENow’s solution monitors all crucial components including your hybrid servers, the network, and Office 365 from a single pane of glass. Knowing immediately when a problem happens, where the fault lies, and why the issue has occurred, ensures that any outages are detected and solved as quickly as possible.

As we start off 2021, we thought it would a perfect time to look back at the ENow Solution Engine... 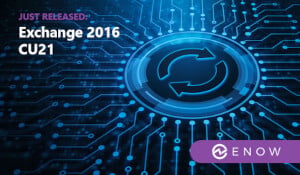 What You Need to Know About CU21 for Exchange 2016

As hopefully many of you already know Exchange Server 2016 entered the Extended Support phase of...