On November 17, 2021, at ~4:06 pm UTC, Microsoft communicated via tweet (@MSFT365status) that they were investigating an issue in which users were experiencing access delays for Exchange Online, SharePoint Online, and Teams.

For IT professionals and system admins with Microsoft admin center access, the issue # was MO298798.

Immediate checks of status.office.com at the time showed no information whatsoever as to any changes in the Microsoft 365 Service Health Status.

There were many public responses on Twitter soon after Microsoft's first reporting of this issue, which can be understood as a more significant service disruption compared to the issue from earlier in the day. Some users were indicating that the issue was impacting Outlook and Dynamics as well.

At approximately 05:37 pm UTC, some 90 minutes after first reporting, Microsoft communicated via @MSFT365status that the impacted geo was North America.  They also communicated that the root cause was "a networking configuration issue" which impacted Microsoft 365 and Azure services.  Lastly, and more importantly, Microsoft confirmed that they corrected the issue (but gave no information as to how they corrected the issue) and that the matter was now resolved. 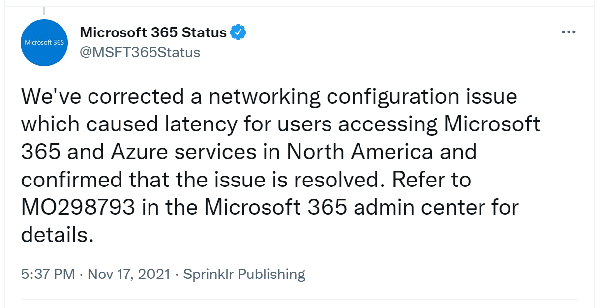 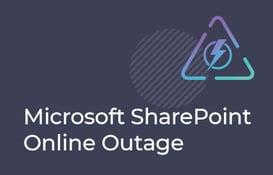 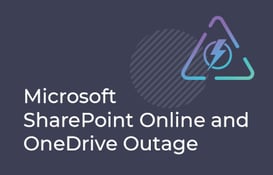