On October 18th at roughly ~1:00 am UTC, Microsoft reported that some users may be unable to view the Service Health Dashboard and Message Center Posts within the Admin Center.

Some users took to Twitter to defend Microsoft by stating that Microsoft had been dealing with increased volumes of users and could not have prepared for this due to the increased number of users working from home and the transition to online learning for most schools.

On the other hand, many users expressed their frustration with the numerous outages Microsoft users have been experiencing lately.

At 4:45 pm UTC Microsoft reported that they had identified the source of the issue and were routing connections to alternate infrastructure to remediate impact.

Finally roughly an hour later, Microsoft reported that they had connected the service to an alternate infrastructure and have validated that service has been restored. 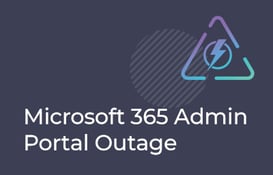 On August 24th at roughly ~5:30 pm UTC, Microsoft reported an issue with users being unable to...

On October 4th at roughly ~5:30 pm UTC, Microsoft reported an issue that was causing delays and...